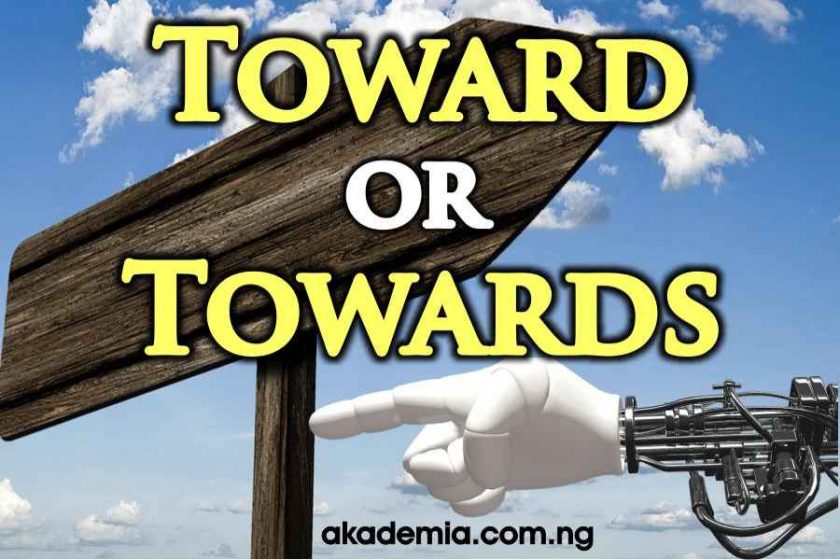 This post, Toward or Towards? Definitions, Differences and Examples, came as a response to a question one of the regular readers of Akademia asked me. I decided to put up this post for the benefit of our teeming readers. I hope you too find this educative.

Toward or Towards? Definitions, Differences and Examples

Toward is a preposition that scholars see as a variant of towards as both convey the same meanings. So let us then see extensively, towards definition…

What is the meaning of Towards?

Towards belongs to the closed class division of the part of speech we know as preposition. (See what is a preposition?). Towards has various shades of meaning. Let us consider some of them…

First, it means ‘in the direction of, en route for, on the road to, toward,’ as you have in the following examples:

Towards also means ‘near, close to or closer to’ as you have in these examples:

Still on towards, let us see more definitions…

This preposition also means ‘in relation to…’ This could be someone or something as you have in these examples:

Furthermore, towards means ‘getting closer to achieving a goal’. It has the sense of ‘with the aim to achieve’ or ‘in order to achieve’. For instance:

Finally, towards means ‘for the purpose or use of, as a contribution to, to assist, to support or promote’. See the following examples:

Difference Between Toward and Towards

To answer this, I will give you some experts’ opinions. Jane Mairs, Director of English language Learning Publishing for Webster’s Learner’s Dictionary believes that toward and towards are completely interchangeable and the choice of which to use is entirely up to the user.  He submitted:

As prepositions, they are followed by nouns or noun phrases. However, there is a difference in their usage. Although toward and towards are used at about the same frequency in spoken language, in written language toward is used much more often than towards, roughly five times as often. (This applies to American English only; in British English towards is the more common variation.) So if you’d like to be on the safe side, use toward and you won’t be wrong. But the choice is really up to you.

Authorities of Encarta1 have their own perspective concerning the use of toward or towards. Hear their submission:

In U.S. English, toward is the usual form but in British English towards is more common. The same principle applies to afterward/afterwards and to some other adverbs of direction that end in -ward, for example, backward/backwards and outward/outwards. Upward, as in moved upward, and upwards, as in increases upwards of 10 percent, are also standard. Note that related adjectives of direction always end in -ward, not -wards, as in a backward glance or an upward trend. The adverb forwards is a seldom used variant of forward in U.S. English, and the -wards spelling of it is never used as a standard U.S. English adjective.

Which is correct? Toward or Towards

Another word expert, who works for Merriam-Webster put up an article titled: Is It ‘Toward’ or ‘Towards’? where he informed that there is no basis for saying that toward is a preference of the American English, while towards is a preference of the British English as nobody has been able to provide justification for that position.

He added that most of the -ward word from the Old English era, that were formed with an adjective, adverb, or preposition such as forward, backward, inward, outward, etc. have analogous -wards mate that is almost identical in meaning.

The expert noted that the early -ward and -wards words functioned as adjectives, adverbs, and nouns, but that grammarians did not quite agree to this. He referred to Edward S. Gould‘s book titled Good English, published in 1867 where Gould claimed that the addition of -s to these words was an ‘innovation’ Do check the article for more clarifications.

Still on this matter, Grammarist, another source that provides perspectives on correct usage has this to say:

Toward and towards are equally acceptable forms of the word primarily meaning in the direction of. Other than the ‘s’ at the end, there is no difference between them. Some people differentiate the two words in various ways, but these preferences are not borne out in the usage of most English speakers. Neither form is more formal nor informal or more or less logical than the other (the Oxford English Dictionary says towards is more colloquial in British English, but we see no evidence that this is true in 21st-century British writing), so you’re safe using the one that sounds better to you.

Use of Toward and Towards

So have I succeeded in a confusing you or giving you an answer to the correct usage of toward or towards? I needed to show you other perspectives so that we can see this issue from a broader perspective. I want to align with the opinions of the experts to let you know that whether you use toward or towards, both are correct. This same applies to words in such class like forward/forwards, backward/backwards, inward/inwards, outward/outwards, upward/upwards etc.

Sentences with the word toward

How to Use Towards in a Sentence

Use towards or toward depending on your choice. See some more examples of towards as used in sentences:

From the discussions on towards and towards, it is clear that you can make use of either depending on your choice. Toward is a variant of towards. See some other related posts to learn one or two things concerning correct usage of words that share certain similarities like further and farther, several and severally, elder and older, ok and okay, efficiency and effectiveness, surpass or supersede, ingenious or ingenuous, affect or effect, belief or believe, stationary and stationery, academia and academic, rout vs route and many others.