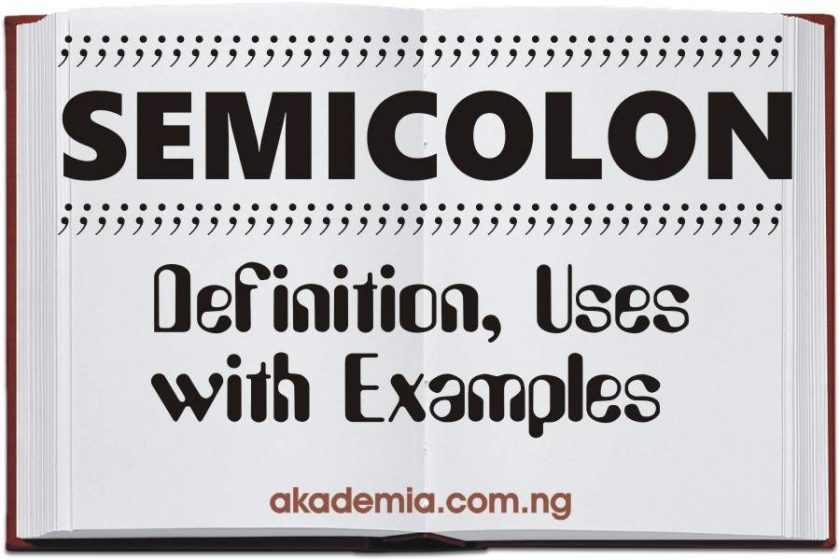 Hi dear reader, there are some of the punctuation marks in English we are yet to talk about; and one of them is the semicolon. So, this post focuses on the Semicolon – Definitions, Uses with Examples.

We will attempt some definitions of the semicolon and consider its various uses with relevant examples.  If you check out the post on the colon, you will see the comment of Cheryl Iverson who notes that there are three marks that are used to indicate a decided pause or break in thought. Guess what, the semicolon is one of them.

It should also be noted that there are sometimes confusions some users of English have when it comes to differentiating between the semicolon and the colon. This post will clarify the confusions.

What is a Semicolon?

The semicolon, also a mark of separation, is much stronger than a comma. It indicates a pause longer than a comma but shorter than a period. It has fewer uses than the comma (some scholars suggest two main uses) and often marks a separation between coordinate (equal) parts.

In another vein, we use the semicolon to separate two parts of a sentence that have a relationship to each other in terms of meaning when each part could stand alone as a sentence in its own right.

Let us see some of its uses…

Between Main Clauses Without a Conjunction

Let us consider some examples of where we use the semicolon to separate main clauses that coordinating conjunctions do not join together:

What this means in essence is that a semicolon can join two independent clauses together, making them one sentence,

You can check for more examples from the post I dedicated to Compound Sentence with Semicolons.

Separation of Items in Lists or Series

We use semicolons to separate items in series or lists which may also have other punctuation marks or commas. That is, separate parts of a complex list when it would be confusing to use commas for this purpose. Consider these illustrations:

We use semicolons before conjunctive (a connective) adverb such as however, therefore, moreover, consequently, etc. when they occur before clauses. Let us illustrate this:

Similar to commas, we sometimes use semicolons to break up a lengthy and complicated sentence, but for the purpose of clarity and disambiguation, it is often better and clearer to split such a sentence up into smaller units. In addition, note that we do not use a semicolon to introduce quotations. See more about this in the post on Quotation Marks.

I am sure you have learned a whole lot of useful information from this post, Semicolon – Definitions, Uses with Examples. There are other punctuation marks you need to learn about; do not deny yourself the opportunity of checking them out and sharing the useful items of information with others. Remember to connect us on our Social Media platforms. See you around.