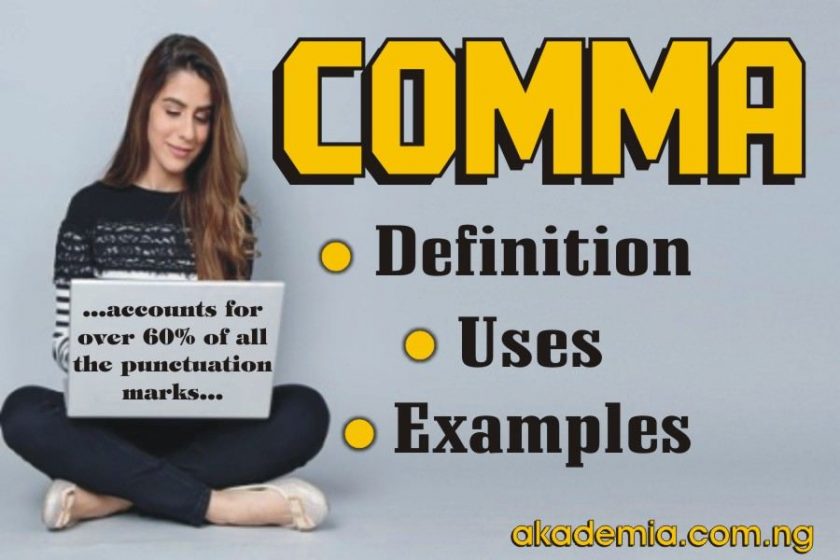 Hello there! Still on our discussions of the various punctuation marks in English, we will be looking at the comma in this post titled: Comma – Definitions, Functions, Uses with Examples. The comma is another popular punctuation mark that many people use indiscriminately without recourse to proper usage. Let us take a look at this punctuation mark…

In looking at this punctuation mark, it will be proper to examine what a comma is before looking at its uses alongside useful illustration.

What is a Comma?

The comma accounts for over 60% of all the punctuation marks we make use of.  In other words, the comma is a versatile and often misused punctuation mark. Current usage favours the insertion of a comma only where we intend a pause.

Comma is a punctuation mark that indicates brief pauses in spoken utterances. Comma indicates a light pause and we use it mainly to separate a structural unit of a sentence, to set off confusing main clauses, parenthetical material closely related to the main thought, direct quotations, forms of direct address, coordinate adjectives and words or numbers.

When to Use a Comma

We also need to know when not to use comma in addition to knowing when to use it. Commas are vital to the meaning of all types of utterances and writings that if misused, meaning can change completely. For instance, look at these sentences below and observe how comma alters the meanings:

Uses and Functions of the Comma

Briefly, let us see some of the major uses of the comma.

We use Commas between Coordinate Clauses

We use a comma before the conjunction that links the main clause in a compound sentence, especially when the clauses are long. For example:

You can see these posts to have an idea of a Coordinate Clause:

In a Series or Listing, Commas to Separate Items

There is usually this debate about using or not using comma after the penultimate item in a list. This final comma, which we refer to as the Oxford or serial comma, is useful in a complex series of elements or phrases but some consider it unnecessary in a simple series such as in the examples above.

It boils down to style or choice of the writer. However, some scholars believe that in order to avoid confusion, ambiguity or misinterpretation, it is better to use the comma. For instance:

They wonder if ‘bread and butter’ constitute a group or separate entities? But as noted above, everything boils down to a matter of choice.

The Use of Comma in Conventional Places

Such places where we use commas conventionally include the following:

We use commas to separate the day of the month and year. For instance:

To separate streets, towns, states, we use commas. For instance:

To separate proper names from titles and degrees. For example:

If the last item in days, addresses and titles falls within a sentence, a comma follows the item. See these examples:

We use commas after the opening salutation in formal and informal letters and after the complimentary close of such letters. For instance:

We use commas after expressions that introduce direct speech or quotations. For examples:

But if the expression interrupts a sentence in the quotation, we use two commas to mark it off. See this example:

Read more explanations in the post on Quotation Marks.

We delineate appositions or appositives (See the post Appositions in English for a proper understanding) by the use of commas. For example:

When we use the vocative case or direct address, we use commas to mark off the words. For instance:

Comma with Interjections and Particles

When exclamations such as wow, oh, alas, and other particles like yes, no, in fact, etc. occur at the beginning of sentences, we use commas to mark the off as you have in these examples:

We Use Commas to set off Parenthetical Elements

There are instances in which a word, a phrase or clause interrupts the movement of thought in a sentence. When this happens, we wet such off by commas or other appropriate marks. See these examples:

Other punctuation marks that we can use in place of commas in the examples above include the dash (n-dash or m-dash) and the parenthesis (brackets).

We use Commas to Mark off Subordinate Clauses

Commas with Non-Restrictive Clauses and Groups

A non-restrictive clause or group does not limit or defines the item it qualifies; that is, it does not restrict or narrow down its meaning and if we decide to omit it, the meaning of the sentence in which it occurs will not be affected. (Read more under Relative Clause). We use commas to mark of the non-restrictive or non-defining relative clause in a sentence to show their subordinate function. Let us consider some examples:

Commas Indicate a Pause in a Sentence or Question

We use comma to indicate a pause in a sentence or in a question. See these examples:

There are various instances where people misuse the comma. We need to know such instances and avoid making mistakes when we use the comma. I have put together a post on the misuse of commas. Check the post Instances Where People Misuse Commas to learn one or two things.

So much to say and learn about this most versatile punctuation mark in English! I am certain you have gained some useful knowledge in this post Comma – Definitions, Functions, Uses with Examples.