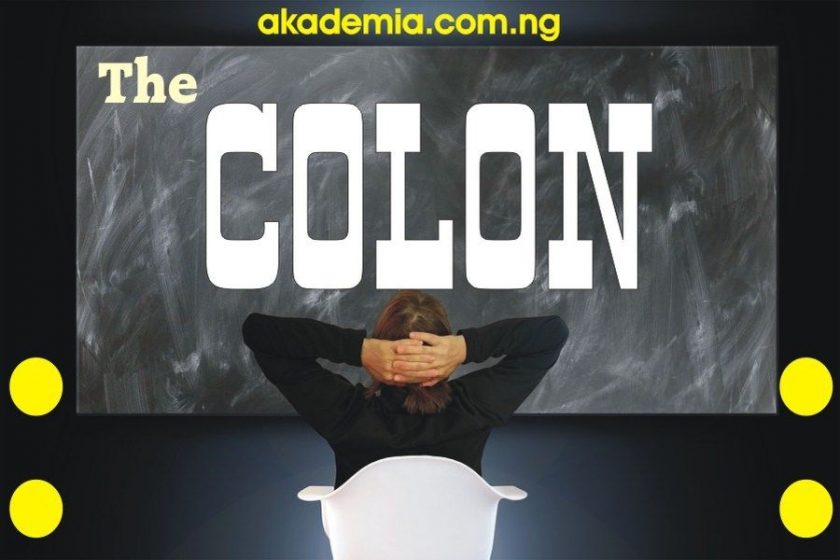 On this platform, we have been looking the various punctuation marks in English severally. Here, in this post, we shall examine Colon – Definitions, Functions, Uses with Examples.  The colon is an all-important punctuation mark and its proper usage helps to spice up our writings.

We are going to look at the colon from the almost exhaustive perspective; though you can still read up other sources on this very useful mark. We will start with some definitions, the functions/uses of the colon and then some relevant examples to aid our explanations. Let us begin all these one after the other; shall we?

What is a Colon?

Cheryl Iverson submits: “the colon is the strongest of the three marks used to indicate a decided pause or break in thought.” The colon, as Corder (1978) described it, is a punctuation mark of anticipation; that is, it directs attention to what follows. When it comes to the use of the colon and the semicolon, there are sometimes confusion some users of English have. But it is important to stress that they are not the same in their functions.

A colon introduces what is to follow; that is the colon most often stands between an introductory statement and an immediate amplification while a semicolon separates equal elements. Let us demonstrate this with the following sentence:

Other Definitions of the Colon

In the words of H. W. Fowler, the colon “delivers the goods that have been invoiced in the preceding words.” In describing what a colon is, George Bernard Shaw posits: “when two statements are ‘placed baldly in dramatic apposition,’ use a colon.” We can illustrate his description of a colon with these examples:

Shaw further explains that when a second statement in a sentence reaffirms, explains or illustrates the first, we make use of a colon.  In addition, when one desires an abrupt pull up, a colon is used.

Shaw explained further that the colon could simply pull up the reader for a nice surprise: For example:

In Lynne Truss’s funny quote on the colon, she opines that a colon is nearly always preceded by a complete sentence, and in its simplest usage it rather theatrically announces what is to come. “Like a well-trained magician’s assistant, it pauses slightly to give you time to get a bit worried and then efficiently whisks away the cloth and reveals the trick complete.” She gave some examples:

Let is consider some of the uses of the colon…

Uses of the Colon

There are various uses of the colon which we need to examine. They are as follow:

When there is a list coming after a main clause, we use the colon, consider the following:

When there is a need to list, especially lists making use of semicolons, the colon is used. For example:

The Colon is Used Between Two Main Clauses

When there are two main clauses in which the second clause is an illustration or an amplification of the first, we may use a colon between them. Consider these examples:

We Use the Colon Before Quotations

Conventional Places Where We Use Colon

After an expression that introduces examples or a mass of material. For instance:

We use colon between hours and minutes when we write them in figures; that is, it divides hours from minutes in statements of time. For instance:

In formal footnotes and bibliographies:

Between the place of publication and the publisher. For instance:

In introducing page number, as in:

or, for more than one page,

For the introduction of issue or page numbers in recording journal articles in a list of references, as in:

In the citation of Bible (chapter and verse), we use colon to separate the two elements, as in:

Between the Title and Subtitle of a Book or Film.

Colon sets off book and film subtitles from the main titles. For example:

In URLs in Scholarly References

Most of these uses of the colon (in time, ratio, business correspondence and references.) are in the non-grammatical sense.

Between Antithetical or Oppositional Statements

One of the typical uses of the colon is a kind of fulcrum between two antithetical or oppositional statements such as:

Separation of Dramatic Characters from Dialogue

I am certain you have gained some useful knowledge in this post Colon – Definitions, Functions, Uses with Examples. You can check out other punctuation marks that I have also put together for your reading pleasure. Do not forget to share this knowledge and connect with us on our Social Media platforms. It is just a click away. See you around.