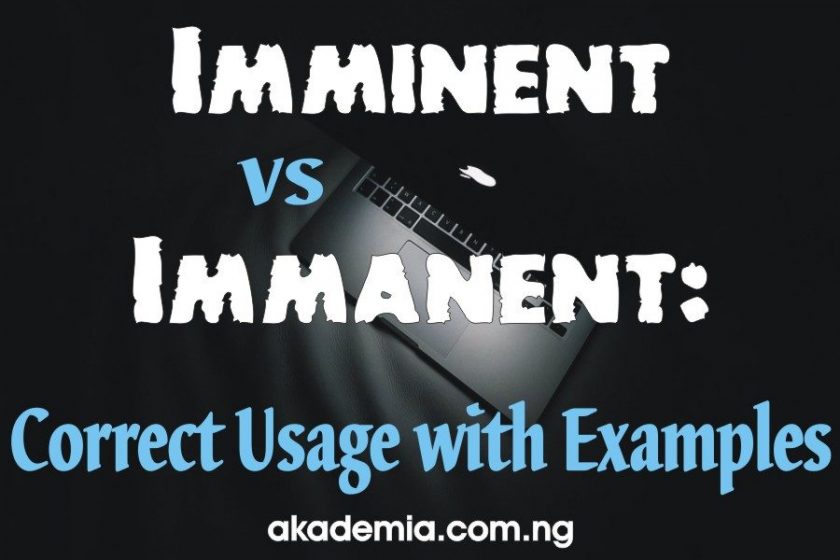 Hello there! Glad to know you are here again. On our Common Error Series, there are lots of issues to be addressed and I will share one of them with you in this post. I call it: Imminent vs Immanent: Correct Usage with Examples. The two words are exactly the same in orthography, save for their fourth letters which are different. So let us get to it!

Many words in English share similarities with many other words that users of English usually mix them up or confuse them with one another. Some of these similarities could be in different forms; similar sounds, similar spellings, similar meanings, similar part of speech, etc. Take for instance the words ‘ingenious’ and ‘ingenuous’. See (Ingenious vs Ingenuous: Correct Usage). We have other words like these two words that share some things in common; words like: academic vs academia, access vs assess, accent vs ascent, affect vs effect, avoid vs evade, aural vs oral, avoid vs afford, surpass vs supersede, whom vs who, belief and believe, the list is endless!  (See Homonyms, Homophones and Homographs).

Imminent and immanent are such two words that look so much alike yet far apart in terms of meaning. You must ensure you understand what the two words mean lest you confuse them with each other and through this post, that distinction will be made. Incidentally, the two words belong to the same part of speech, adjective and their noun forms are also similar. You can get that by the use of the noun-forming suffix ‘-ence’; this gives you ‘imminence’ and ‘immanence’.

Imminent is an adjective that means ‘about to take place, about to occur or happen or threatening to happen’. It refers to what is impending or liable to happen soon. It is from the Latin word that means ‘hang over’. The expression reminds one of the famed Sword of Damocles. Other synonyms for ‘imminent’ include: approaching, coming, nearing, upcoming; brewing, gathering; pending; likely, possible, probable; ineluctable, inescapable, inevasible, inevitable, unavoidable, etc.

Examples of Imminent as Used in Sentences

Immanent has more than a shade of meaning. Firstly, it means ‘existing within or inherent in something’. Secondly, it means ‘existing in all parts of the universe’. This second definition thrives in Philosophy and Theology. It describes God as existing in and extending into all parts of the created universe. We can also describe ‘immanent’ as ‘remaining or operating within a domain of reality or realm of discourse,’ or ‘that which have existence or effect only within the mind or consciousness’. You can also compare the word ‘Immanent’ with the word ‘transcendent’. See ‘Immanence’ below. Some good synonyms to help you remember the meaning of ‘immanent’ are: inherent, existing throughout and within something, integral, intrinsic, indwelling, restricted entirely to the mind or a given domain, internal, subjective and many more.

Examples of Immanent as Used in Sentences

Related words to Imminent and Immanent

This is the noun form of the adjective ‘imminent’. It is derived from the noun-forming suffix ‘-ence’. It means the state of being imminent and liable to happen soon. Words synonymous with ‘imminence’ include: imminency, imminentness, impendence, impendency, forthcomingness, etc. Let us see examples of ‘imminence as used in sentences…

This is the noun form of the adjective ‘immanent’ which is also derived from the noun-forming suffix ‘-ence’. It means the state of being within or not going beyond a given domain; the quality or state of being immanent. Presence, inherence, pervasive, pervading, permeating, omnipresent, ubiquitous, present everywhere, etc. are words synonymous with ‘immanence’. Immanence is also a concept in philosophy and theology which opines that the intelligent and creative force or being that governs the universe pervades the natural world. According to Encarta, “Immanence is a fundamental doctrine of pantheism and can be contrasted with transcendence, which conceives of the intelligent and creative force as existing outside the natural world.”  Pantheists believe that divine presence pervades all material objects in the universe while Judeo-Christians religions hold that God both actively participates in the natural world and also transcends it. Let us see some sentences exemplifying ‘immanence’…

‘Imminently’ is the adverb form of the adjective ‘imminent’.

‘Immanently’ is the adverb form of the adjective ‘immanent’.

Before you log off, take a peek at these posts: Commonly used Wrong Words. There are other Commonly Confused Words and also some Words with Silent Letters. Remember to click up these other related posts:

Make sure you share these posts with your friends! Sharing is just a button and a click away!