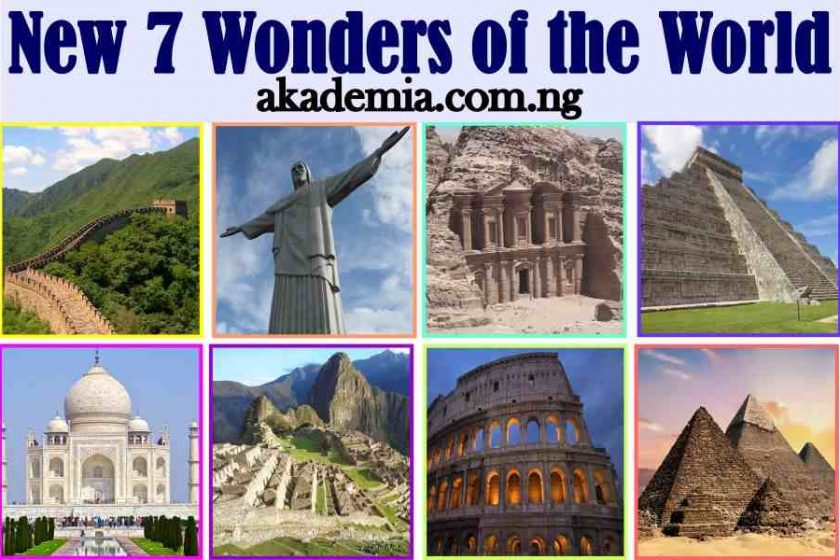 8 Wonders of the World

There are various list of wonders of the world that have been compiled from time immemorial to the present day to catalogue the world’s most spectacular natural wonders and man-made structures. Numerous authors and organizers have composed lots of wonders of the world, as a result of this; there has been a debate over how large the list should be.

Nevertheless, as a result of the collapse of most of the earliest compiled wonders of the world, an initiative was started in 2001 by the Swiss Corporation New 7 Wonders foundation to choose the new 7 wonders of the world from a selection if 200 existing monuments.

New 7 Wonders of the World

So, let us check out each of these New 7 Wonders of the World and learn one or two things about these historic and historical wonders…

The Great Wall of China

This is the world’s longest wall and the biggest ancient architecture that is over 2,600 years old and is located in Bandaling, China. The wall is a series of fortification made of stone, brick, rammed earth, and other materials. The great wall is not a continuous long straight line; rather it has winding paths which stretches over rugged country and steeped mountains, thereby giving it great scenery to behold.

Its several walls were being built individually as early as the 7th century B.C. But they were later joined together and made bigger and stronger, that’s why they are collectively referred to as the Great Wall of China. The great wall which has included border controls was generally built along an east-to-west line across the historic northern borders of China to allow the regularization and encouragement of trade as well as protect the Chinese states and empires against raid and invasion.

This citadel is set high in the Andes Mountain above the Urubamba river valley in Peru. The citadel built in the 15th century is referred to as the structure of the Incans, a tribe in Peru. Macchu Picchu in the native language means ‘Old Peak’ and was declared a Peruvian history sanctuary in 1981.

The Incan city structure had been lost since time immemorial but was discovered in 1911 by an explorer and archaeologist, Hiram Bingham, after several centuries of its disappearance. The Incan city citadel or lost cities served a palace for the emperor, a fortress and a site for religious ceremonies.

This wonder is the statue of Jesus located at the peak of a 709-metre long Corcovado Mountain in the Tijuca forest national park overlooking the city of Rio. This 30-metre long statue which is referred to as the symbol of Christianity across the world was constructed between 1922 and 1931, by Polish-French sculptor, Paul Landowski and Brazilian engineer, Heitor da Silva Costa.

The statue, which has an outstretched arm as if to encompass all of humanity, is the largest art deco-style sculpture in the world and is one of Rio de Janeiro’s most recognizable landmarks. The statue was said to have been built after the World War 1, when catholic followers in Brazil felt they needed a symbol to negate what they saw as increasing godlessness throughout the country. That is, the Christ the Redeemer statue came in response to an advancing tide of godliness in Brazil as of that time.

This is an oval shaped amphitheater that is located in the center of Rome, Italy. It’s the largest and most famous amphitheater ever built in the Roman world and remain as a model for sports facilities right up to modern times. In Latin, the structure is referred to as the Flavian amphitheater after the name of the three emperors of the Flavian dynasty in Rome.

During the reign of the Roman government, the structure was used for gladiatorial fights and public executions, animal hunts, re-enactment of famous battles and drams based on classical mythology. The provision of the gladiatorial games was seen as a means to please the Roman god and goddess and to avert Rome from any form of disaster. That’s why the amphitheater’s reputation goes as a sacred spot where many Christian martyrs met their fate.

This is a world famous complex of the ruin of a dazzling city that once centered an empire in the country known as the Mayan empire in Central America. The Chichen Itza Mayan ruins on Mexico’s Yucatan Peninsula means ‘at the mouth of the well of Itza’. The complex is an ancient city which thrived around the 600A.D to the 1200s.

Smaller structures like the ball court, temple of the warriors and the wall of the skulls make up the graphic stone carvings of the Chichen Itza. The current structure however was designed in 1988 and the steps of the structure is 365 in number, which stands for the number of days in year.

This natural wonder is a symbol of Jordan, established possibly in 312 BC. It lies on the slope of Jebel Al-Madhbah identified by some as the biblical Mount Hor, in the large valley running from the Dead Sea to the cult of Aqaba in Jordan. The site was discovered by a Swiss Explorer, Johann Ludwig in 1812.

The name of the site is called Petra which is the Greek word meaning ‘Rock’, because the city was carved inside a red-rose sandstone rock. The city of Petra is comprised of hundreds of tombs, houses, temples, a theater and altars where animals were sacrificed to calm the angry gods or ask them for favours.

This ivory-white marble mausoleum on the south bank of the Yamuna River in the Indian city of Agra was built in 1632 by a Mughal emperor, Shah Jahan, to house the tomb of his favorite wife, Mumtaz Mahal, whom he fell in love with at first sight.

That is why the structure is referred to as the world’s famous testimony of the power of love. That’s because the gigantic mausoleum was built by Emperor Jahan in honour of his wife. The building named after the wife means ‘a tear drop on the cheek of eternity’.

The mausoleum is built with white marble, precious stones like mother of pearl, diamond, and so on and it took 20, 000 workmen working over a period of 22 years to complete the structure at an estimate cost of 32 million rupees, which would approximately be 27 million dollars.

The Great Pyramid of Giza

This is an archaeological site located in the Libyan Desert on the west of the River Nile at the old town of Giza. The pyramid which has been built for than 4,000 years ago is by far, the oldest of the ancient wonders and the only one still in existence. It was the tallest man-made structure in the world for over 3,800 years and it weighs as much as 16 empire state buildings!

The Great Pyramid of Giza was the greatest of the 3 pyramids built as a tomb for the fourth dynasty Egyptian Pharaoh identified as Khufu and for his wives.  The construction lasted over a 20-year period. This great wonder, built from more than 2 million blocks of limestone with each one weighing as much as two and a half elephants, is about 50 stories, standing at a height of about 460 feet.

New 7 Wonders of the World: Recap

I’m sure you have learnt something about the New 7 Wonders of the World. It is good to know about our world alongside the historic and historical phenomena in it. There is an interesting post you also need to check out to learn some interesting facts about the 7 Continents.

You can also see these interesting posts…