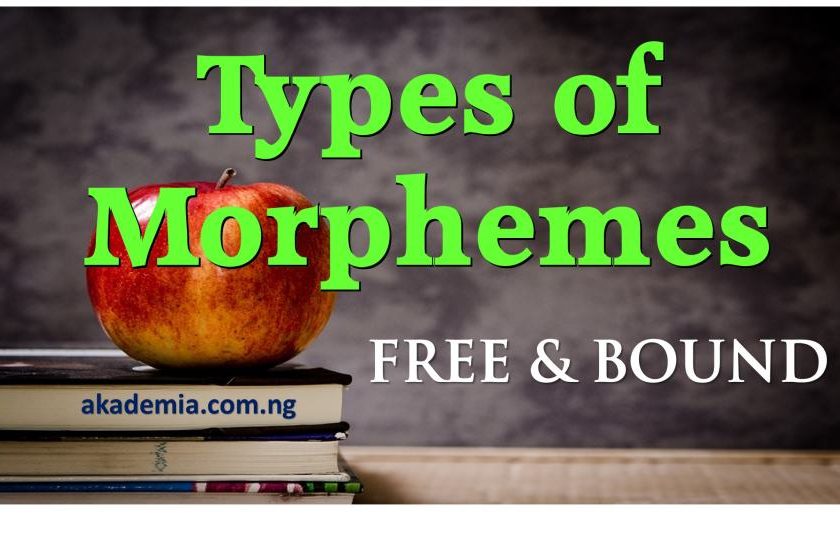 The post, Types of Morphemes: Free and Bound identifies and examines the two major morpheme types that we have in English. There are basically two of them and they also have their subdivisions. They are:

Let us examine each of these severally:

A free morpheme is one that can stand by itself as a single word. In other words, it can exist independently without any obligatory association with other morphemes. Examples include: open, boy, door, team, dance, teach, house, look, break, sad, come, when, if, to, for, teach, say, me, you, girl, car, native, name, cook, etc. Another name for free morphemes is the base word or stem word or root word. We can further subdivide Free Morphemes into two segments. Let consider this as we break down the concept of morpheme into comprehensible bits of knowledge.

There are two categories. These are Lexical morphemes and Functional morphemes.

These morphemes carry ‘content’ of messages we convey. In other words, lexical morphemes are content words. A content word is a word that is semantically meaningful; a word that has dictionary meaning. Examples of these words are nouns, adjectives verbs and adverbs. They are words that belong to the Open Class of the Parts of Speech or Word Classes in English.

These morphemes consist mainly of the functional words in the English language and they include words that belong to the Closed Class of the Parts of Speech or Word Classes in English. Examples are conjunctions, prepositions, pronouns and articles. Functional words or grammatical words do not contain meanings on their own except when used alongside content or lexical words. They have no dictionary meaning and only perform a grammatical function.

Bound Morphemes are the opposites of Free Morphemes. They are morphemes that cannot stand alone, that is, they cannot exist independently without being joined or added to another morpheme. Examples include: -ish, -ness, -ation, -tion, -ism, -al, -er, -s, -en, -ed, etc. When you look at the following words, they are combinations of both free and bound morphemes: foolishness, bookish, naturalisation, farmer, does, bags, taken, expected, etc.

Types of Affixes in English

However, some scholars consider words like therm-o-dynamics, therm-o-meter, bar-o-meter, etc. in English as containing the infix ‘o’, but like we said, it is not an established phenomenon in English.

4 Definitions of Morphemes: Types and Examples