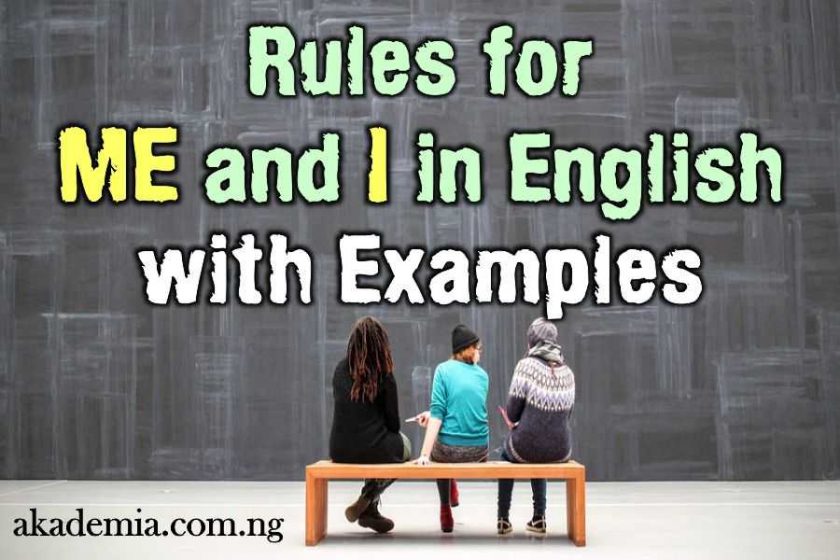 This post titled, Rules for Me and I Grammar with Examples, focuses on addressing the confusion that arises concerning the correct usage of I and ME. It is not news that most users of English confuse ‘I’ and ‘me’ when it comes to appropriate usage. Both are pronouns and when it comes to types, they fall under the category of personal pronouns.

Rules for Me and I Grammar with Examples

A whole lot of people are interested in knowing how to use ‘I and me’ correctly. Various questions ranging from is it ‘me and I’, ‘me or I, or ‘me vs I’ to ‘I or me’ have been asked. Some are interested in the ‘me and I grammar’, ‘I vs me grammar’, ‘use of I and me’, ‘I or me rule’, ‘using me or I’ etc. This post attempts an explanation. Read on…

Correct Usage of ‘I’

When it comes to how to use ‘I’, it should be used as the subject of a sentence; in other words, it functions as a subject pronoun. For example:

‘I’ is nominative in nature. Nominative has to do with a grammatical form case of nouns and pronouns which identifies the subject of a sentence or a clause.

‘Me’ refers to the speaker or writer used as the object or complement of a verb or a preposition as we have in:

It also refers to the personality of the speaker or writer or something that may express it (though informally). For example:

Correct Usage of ‘Me’

Wrong Assumption of the Usage of ‘I’ and ‘Me’

Most people often wrongly assume that when it comes to politeness, ‘me’ is less ‘polite’ than ‘I’. This, probably, could be because they have been taught that in answer to such questions such as ‘who is there?’ the grammatically correct reply is ‘it is I’.  As a matter of fact, and except in formal contexts, ‘it is me’ is frequently found in modern usage, especially in spoken contexts.

Merriam-Webster has this to say about the pronoun ‘me’…

‘Me’ is used in many constructions where strict grammarians prescribe ‘I’. This usage is not so much ungrammatical as indicative of the shrinking range of the nominative form: ‘me’ began to replace ‘I’ sometime around the 16th century largely because of the pressure of word order. ‘I’ is now chiefly used as the subject of an immediately following verb.

‘Me’ occurs in every other position:

Absolutely (who, me?), emphatically (me too), and after prepositions, conjunctions, and verbs, including be. For example:

Almost all usage books recognize the legitimacy of ‘me’ in these positions, especially in speech; some recommend ‘I’ in formal and especially written contexts after ‘be’ and after ‘as’ and ‘than’ when the first term of the comparison is the subject of a verb.

The under-listed posts also offer useful insights. You can check them out: